SAI BABA, NBA AND THE PREMATURELY ORPHANED PORTRAIT – A CHANT 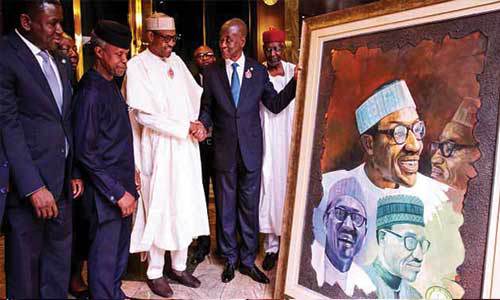 BY SAM ELEANYA
Awoof, they say, dey run belle.
The Nigerian Bar Association, NBA (actually, its senior members who get those million dollars briefs from the federal government as a matter of course) wanted to go and see the President. To greet him, close-up.
A distinguished delegation the Bar chose too! Garlanded as it were with SANs and Czars, ancient and modern.
Even the future was not left out as three of the leading candidates for the next President of the Bar – Professor Ojukwu, Arthur Obi and Afam Osigwe – all made the cut to see Sai Baba or so the NBA Welfare Secretary reports.
They all thought of what to present to him – dear husband of Aisha – that would invigorate the President’s frame, without a word spoken – for good or ill.
And heavens!, did they find the perfect gift! And not in Sokoto State – but in their very sokoto: an ‘unowned’ portrait of the self-same President lying conveniently abandoned in one corner of the NBA Secretariat.
A 6 feet life-sized portrait of the President which the NBA did not buy. A brain-craft alien to the primary beat of the Bar. One that the fastidious Bar has no record of its purchase or donation to the body: one attaching to it neither by fee or for free.
Yet, talk of things falling in pleasant places. For the Bar which saw: Free; 6 Feet; Art work; Professionally delivered.
Free: But worthy. Enough, to coax a mirth, publicly, out of the President. Yet, costing the NBA zero: in Naira, not to say Dollars. And crested with the NBA seal to boot!
NBA. Body of lawyers. Its senior members, Assumed by detractors to know the law. Expected by unreasonable people to care about the vagaries of otherworldly intellectual property rights! And, wonders of wonders, required by haters to be the first responders, and defenders of intellectual property rights of strangers – not to say a fellow but younger lawyer – in a country looking to diversification and lawyers to lead the way.
That same NBA. Its Leaders. Paid zero, sorry, heroic consideration to the question: who made this huge painting? Of the President. And came up with zip. Nothing. aka Doesn’t Matter.
Minimalist Paintings – 30 inches set- come with well-placed signatures. Of their proud makers. This one was 6 feet tall – loud and proud so to be – complete with 6 feet-of-canvass worthy signature of its creator.
Art signatures are designed to be intentionally loud and clear: screaming, BEWARE: somebody – ME- sweated and brainstormed over this!
But, that is, if you are not the Law, sorry the NBA, armed with the ouster clause that cures all claims of finicky rights prefixed by ‘intellect’: more so, where an important trip to Aso Rock needs to proceed as the Court pleases. More so, when the Bar can play the cynic. “Pray, what manner of artist-eque lawyer fails to put his phone, Voter’s card and BVN numbers, NBA seal and home address to a 6 feet canvass of the President coming to the NBA den?]
Heaving, they heisted, sorry, hoisted the portrait to their necks – hopefully, remembering to put a rag to its frame as to shave off its layers of cobwebs and dusts, at least, one year thick. And off to Aso Rock they trooped. Like an European troupe ‘transporting’ ancient Bini crafts across the Atlantic for safe-keeping with ‘innocent curators abroad.
To give the President what they unquestioningly believe he deserved. A stolen, sorry, storeyed portrait of himself quieter than the change-afflicted one the President beheld every morning, in his mirror: a portrait immune, for ever, to the affliction its kith of Mirrorland must daily overcome if it must live to keep a-leading the lot of a lugubrious land.
See? Why the picture a-tickled the President. And the Vice President too. Both rendered accessories after the fact for happiness arising from what is now deemed an enlarged, sorry, alleged heist. Their now threatened enjoyment was a beloved utopia (known only to wielders of their offices): privately-cherished but unattainable again – like the womb for the grown man – for the few that dares and lands the burning coal that to the uninitiated is called the office of the ‘President’ and his vice.
And now even that – its effigy, the portrait – is tainted. Because of the Bar. And its disconnect with intellectual property.
Somewhere in Aso Rock, hopefully not in the other room, now lies a portrait 6 feet tall that the President wished he can stll become but now wishes he never ever had – and that the Vice President prompted him professorially, to ask with military alacrity: where is the receipt?
With this portrait in his parlour accusing the President, who needs Ayo Fayose? And seeing the lawyers brought it him – who will plead for the President?

Read more
This template supports the sidebar's widgets. Add one or use Full Width layout.